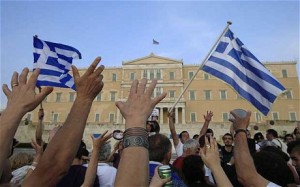 Greek MPs are to debate new proposals sent to the country’s creditors with the aim of getting a third bailout and averting a possible exit from the euro. The plans contain controversial elements, including pension reforms and tax rises, that were rejected at a referendum called by PM Alexis Tsipras. The EU and other creditors are studying the plans before a summit on Sunday. France and Italy welcomed the proposals but Germany, Greece’s biggest creditor, warned of little room for compromise.

The measures submitted in the new Greek document include:

Greece’s creditors have already provided more than €200bn in two bailouts since a rescue plan began five years ago. The second bailout expired on 30 June.

Greece’s banks are still closed and the €60 (£43; $66) daily limit on cash machine withdrawals for Greeks, imposed on 28 June, remains in force. With a shortage of €20 notes, for many the limit is in effect €50.
To read the rest of the article visit: Greece debt crisis: Greek MPs to debate controversial reforms plan